Home > Blog > Why You Want a Remington 870 for Home Defense

Why You Want a Remington 870 for Home Defense

There are lots of good reasons why someone shopping for a home defense shotgun would feel an immediate kinship with the Remington 870.

For one thing, familiarity. The pump-action Remington 870 is the classic shotgun in the minds of most people because it’s the one they have seen and been around most often. The Remington 870 is the biggest-selling shotgun in history, with more than 11 million sold since it was introduced in 1950. It has earned its reputation as an all-purpose gun to keep around the house for home defense, garden pests, sport shooting and as a campsite weapon.

First, there are reasons many people want a pump-action shotgun to defend themselves in a home invasion scenario. A pump-action shotgun is more powerful than the average handgun, making it an excellent equalizer in a home defense scenario. They accept a wide range of ammunition, from non-lethal rounds to standard shotgun shells and up to the double-ought buck that can penetrate a metal door. They are among the most affordable guns, and they are widely available. And pump-action shotguns are easy to clean and maintain with common cleaners. 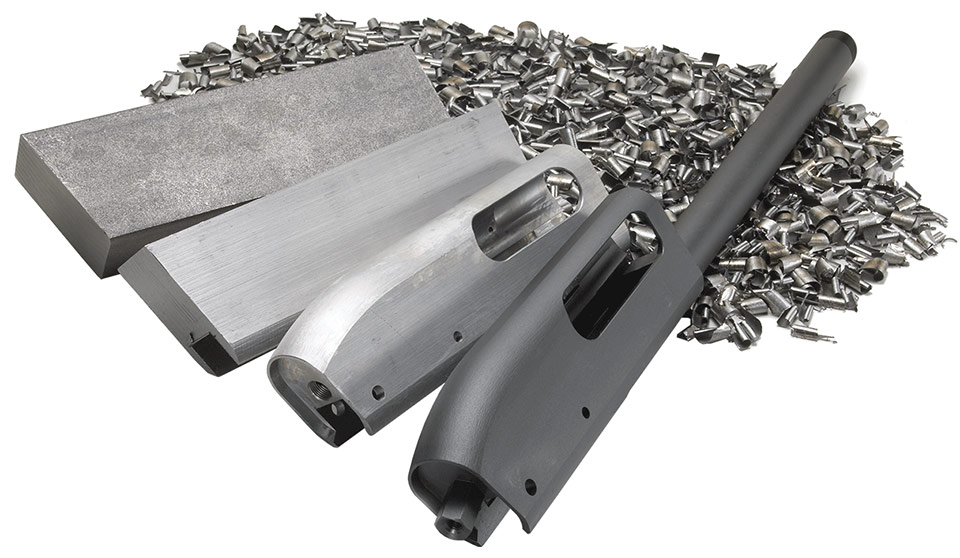 The Remington 870 is a top choice for a pump-action, home defense shotgun because of its quality, dependability and value. Its receivers are milled from a solid billet for steel, which makes it incredibly strong and durable, and its twin action bars ensure a smooth, bind-free action. It’s a gun that also has a lot of influential fans. Firearms expert Richard Douglas called the Remington 870 the “ultimate home-defense shotgun” in an article for National Interest.

The wide range of models and options available with the Remington 870 is another reason it remains so popular after more than 60 years. In an article for Gun Digest, champion marksman Elwood Shelton included the Remington 870 Home Defense model among the four best tactical shotguns, alongside the 870 Express Tactical, the most common shotgun used by law enforcement, the Remington 870 DM Magpul, which features a detachable magazine, and the sleek 870 Special Purpose Marine, with its flat-black stock and corrosion-resistant electroless nickel plating on its metal parts, both internal and external.

The versatility of the Remington 870 goes on from there, with nearly a dozen more variations and dozens more configurations beyond those. The 870 Wingmaster is a favorite for skeet, trap and field shooting, while the compact 870 Tac-14, with its Raptor-style pistol grip and Magpul M-LOK forend is designed for self-defense (more on it below).

For home defense, there are a few Remington models that particularly stand out. The aptly named 870 Home Defense model is a 12-gauge designed for close quarters action, with an 18.5-inch barrel and a fixed cylinder choke, and its optional 6-round tubular magazine gives it two more shots than standard 870 models. At 7.5 pounds, it’s heavy enough to keep the recoil manageable, it’s affordable (well under $500), and the wood stock and forend that give the Home Defense its classic shotgun look is now available with dark-stain hardwood.

For all of its illustrious history as America’s favorite shotgun, as well as its financial and production issues over the last decade, the Remington 870 line has been expanded to meet the current trend of pump-action weapons that fire shotgun shells, which Marine vet and self-defense/concealed carry instructor Paul Travis called “a completely legal sawn-off” (when referring to the category-leading Mossberg 590 Shockwave). 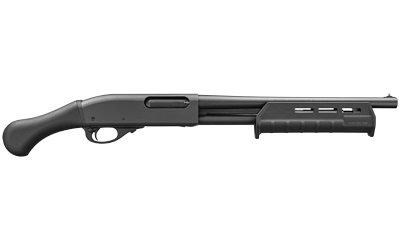 Like its Mossberg competition, the Remington 870 Tac-14 is extremely compact, with a 14-inch barrel and overall length barely over 26 inches. These dimensions are important, because weapons like the 870 Tac-14 aren’t technically shotguns (since they are not designed to be fired from the shoulder), but they are also long enough to avoid the National Firearms Act’s problematic designation of AOW (“any other weapon”). Tac-14s have a 4-plus-1 capacity (the 870 Tac-14 DM’s external box magazine gives it a 6-plus-1 capacity), a black synthetic Raptor-style pistol grip and a Magpul M-LOK forend. Remington has its rivals beat on price, though. For an equivalent amount of bad-ass weapon, the Tac-14 is about $100 cheaper than the Shockwave.

Once you begin to explore the many models and configurations of the Remington 870 family of pump-action weapons, it’s easy to see why noted outdoors writer Chris Niedermier called the Remington 870 “the greatest shotgun of all time, period,” in an article for Outdoor Life. Neidermeir considered the 870 Express and Express Super Magnum the best shotguns available for $500 or less.

First Focal Plane vs. Second Focal Plane: What You Need to Know Before You Buy
01/11/23